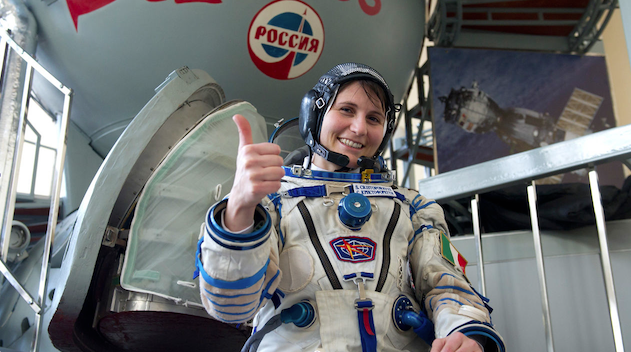 Girl coders invade the white house, the first Italian woman soared into space, a family robot was born, and a teenager designed the first heat-powered flashlight. All these incredible feats, and more, were achieved by women in 2014 – and we’re even more excited to see what 2015 brings.

This story was originally featured on Fast Company, but we have a quick run down of their 10 picks. Don’t forget to check out our own stories featuring women in maths, including the Robogals, the original women of computer programing, and some stats on how girls are outperforming boys all over the world.

Perhaps the most prominent story featuring a woman’s incredible achievement within STEM fields last year, 2014 saw the first woman in history to receive the prestigious Fields Medal. Maryam Mirzakhani became the first woman ever to receive the Medal in its 80 year history for her work in understanding the symmetry of curved surfaces. While her work is largely theoretical, her continuations to geometry and dynamical systems have hugely beneficial ramifications to both physics and quantum field theory.

Appointed by the White House, no less, Megan Smith became America’s Chief Technological Officer in September 2014– the third woman to ever achieve such a position. Megan has long been representing women in her field, having also led Google’s Made with Code initiative which encouraged young girls to get excited about computer science.

For The First Time Ever, An Italian Woman Rocketed Into Space

53 years after the first human orbited planet earth, Italian Air Force pilot Samantha Cristoforetti has become the first Italian woman to follow suit. She’s also joined by fellow female astronaut Elena Serova, of Russia. During her time in space, Cristoforetti will be conducting experiments on how microgravity affects sleep, and running an awesome twitter account featuring specular images of the cosmos. We don’t need to speak Italian to appreciate the gorgeous images she’s projecting from the space station, where she’ll remain until May this year.

She set a goal of raising $100,000, and ended up with $2.5 million dollars instead – all inside two months’ time. Cynthia Breazeal, the CEO of a social robotics company by the name of Jibo Inc, set about making the world’s first “family robot”. Her robot is designed to treat people like, well, people, and is trained to perform tasks typically undertaken by apps and personal assistants.

85-year-old Edith Flanigen was presented with the Medal of Honor by President Obama this year, honoring her work in molecular sieves. Over four decades of work at Union Carbide helped her design a safer and more efficient method of manufacturing gasoline. She also began he career in 1952, at a time where very few women entered the field of chemistry – and her achievements since are certainly an inspiration to girls everywhere about to enter previously male-dominated industries.

A Teen Inventor Made A Heat-Activated Flashlight

After learning that a friend in the Philippines couldn’t study at night due to lack of lighting, teenager Ann Makosinski developed a torch that runs purely off body heat radiating from the hand. Her incredible efforts won her the prize at Google’s Science Fair and a spot of Jimmy Fallon’s “Fallonventions”. This teen certainly has a bright future ahead of her…pun shamefully intended.

From a university dream, to producing a solar power system every ten minutes, 35-year-old Lynn Jurich has certainly achieved a lot in the past ten years. As CEO of her company Sunrun, Lynn has obtained a huge $1.6 million dollar grant from the government and produced an interactive kiosk that helps residents determine whether or not their homes are suitable for solar energy systems.

A Middle School Student Stitched Together Science And Sewing

At just fourteen-years-old, an American Middle School student by the name of Holly Jackson won a $25,000 prize for the Broadcom Master’s competition. Her project, Sewing Science, is an engineering device that helps measure the strength of fabric and threads, making it useful for the production of protective gear manufactures – as well as aiding fashion designers and amateur sewing students.

Toy-company GoldieBlox has certainly ruffled a few feathers in the last few years, but they took over the popular American Macy’s Parade with their engineering-inspired float, The Girl Powered Spinning Machine. The company aims to engage more girls in STEM subjects and careers, with their toy range featuring the Girl Powered Spinning Machine – a construction and book set – and the GoldieBlox Zipline action figure – which features a young girl in the place of typically male action figures. Both toys feature basic mechanical and engineering concepts, helping to foster a love of STEM fields at an early age.

The National Christmas Tree Lighting went off with a bang as girls across the country helped program the flickering tree lights down to the second – all with the help of Google’s Made With Code initiative. The White House also invited more girls and boys to participate in their “Hour of Code” event at the White House, with one young girl demonstrating how to write the first line of code tO President Obama.