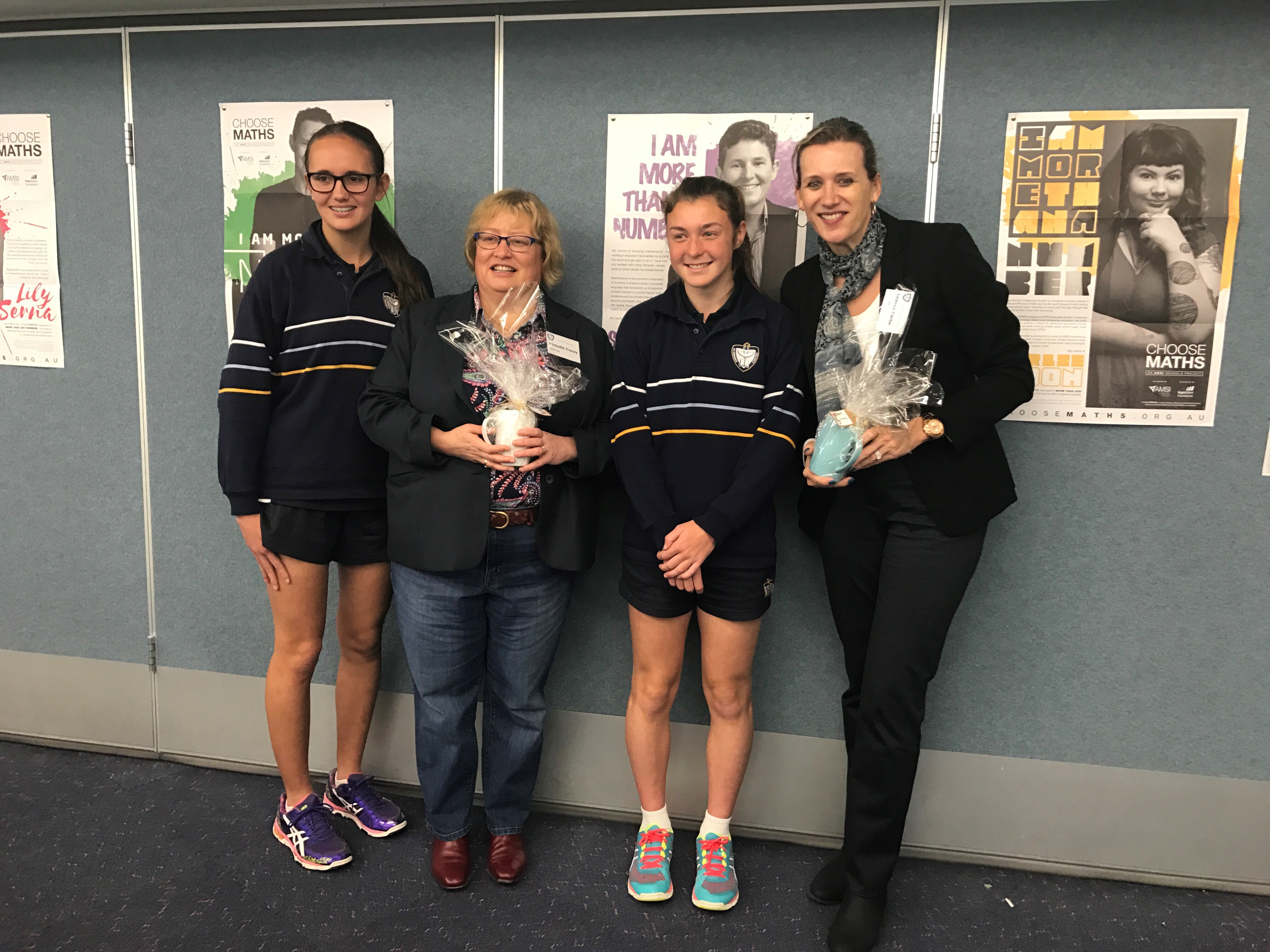 What do you get when you have 74 girls, 7 teachers, 5 Regional Champions, 3 guest speakers and maths activities all in the same venue? An amazing day in which Year 9 and 10 girls get the opportunity to hear about the role mathematics plays in a variety of jobs, and hopefully become inspired to stay with maths through to Year 12.

On Friday 11th August at Caritas College in Port Augusta, South Australia, Year 9 and 10 girls from Caritas College, St Mark’s College, Port Pirie and Samaritan College, Whyalla, came together for a GEM (Girls Enjoying Maths) Day. Five Regional Champions, women from the local community, talked to the girls about the role maths played in their jobs on a daily basis. Using a ‘speed dating’ model, each Regional Champion spoke to 15 girls for 10 minutes before the groups moved onto the next champion. This worked really well as it was less intimidating for people who were not necessarily used to speaking to large groups, and each speaker only had to prepare a 10 minute talk. The Regional Champions came from a variety of careers: an environmental scientist, pharmacist, electrician, hairdresser and firefighter, and the girls were fascinated to hear about the maths involved in each career.

“It was great learning about how maths was in so many jobs.” (Victoria, Year 9, Samaritan College)

After recess, Michelle Tracey, Project Manager of the underground railway expansion into the Southern Mining Area at BHP Olympic Dam, and Dr Julia Collins, CHOOSEMATHS Outreach Officer for the Women in Maths Network, ran concurrent sessions. Ms Tracey spoke about the role mathematics played in her career as an engineer and project manager and how it had enabled her to travel the world, working in some amazing places, experiencing different cultures and managing incredible projects. Among the most important messages Ms Tracey imparted were that of positive self-belief and perseverance.

“I enjoyed the talk with Michelle. She encouraged us not to give up.” (Ardia, Year 9, St Mark’s College) 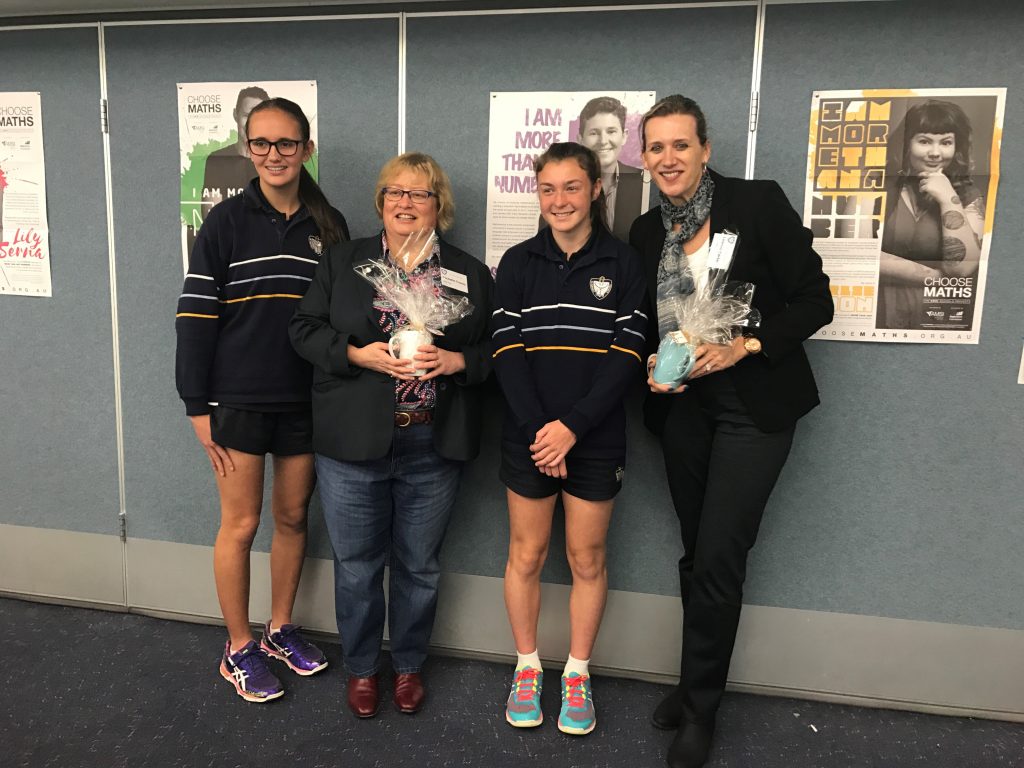 Dr Collins wowed the girls with card magic and then challenged them to find the mathematics behind the tricks. The girls rose to the challenge and the buzz in the room was electric as they performed the tricks on each other, trying to discover why and how they worked. All up the girls were shown and attempted 5 different tricks including the ‘Steinmeyer nine-card’ trick.

“Take any nine cards from a standard 52-card deck and deal the nine cards into three piles of cards each. Pick up any pile and remember its bottom card. Drop this pile on top of one of the others, and these six on top of the last pile. The cards remain down throughout.

The position of the chosen card should now be at a random spot because card names spell out with as few as 10 letters up to as many as 15. So, now spell M A G I C and turn over this last card. Believe it or not, this will always be the selected card!”

“I liked the card tricks, they were really interactive.” (Tara, Year 9, Caritas College) 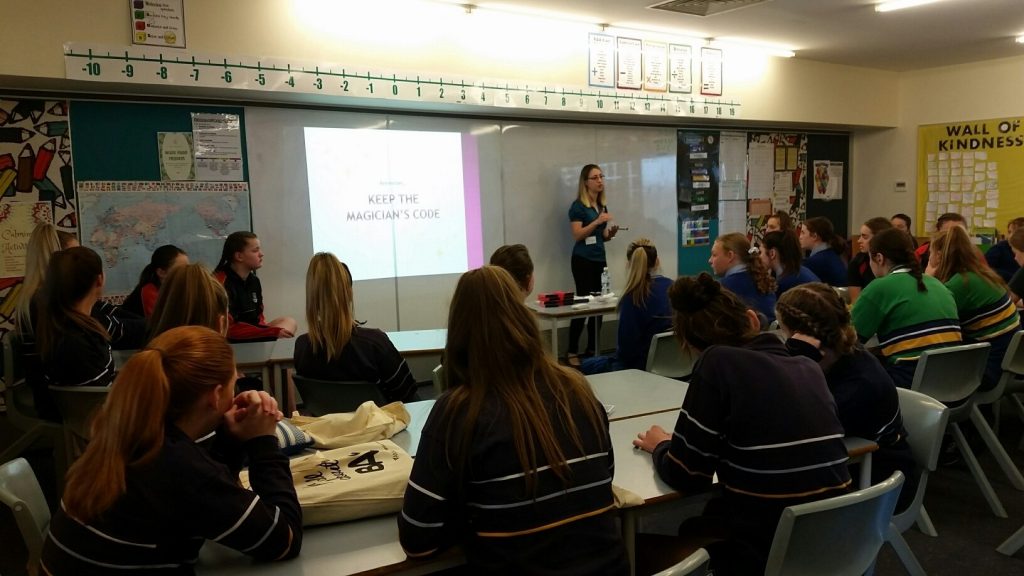 After 45 minutes, the two groups swapped speakers. The girls found both these sessions very interesting. The local TV channel, Southern Cross News, came along and filmed during this session. They interviewed girls and teachers; there was great excitement when they were on TV a couple of days later. The Transcontinental, Port Augusta’s local newspaper, also visited resulting in a great article the following week.

In the afternoon, before the Samaritan and St Mark’s girls headed home, four different maths activities were offered; the maths of origami, CSI AMSI, Maths and Maps and Mobius strips and Knots. Each of these activities exposed the girls to maths through a different lens and encouraged them to think about the creative aspect of the subject.

The comments gathered about the day indicated the girls felt it was worthwhile:

Overall, the GEM day was highly successful and a wonderful opportunity for girls in the Port Augusta region to consider how they might include maths in their future.