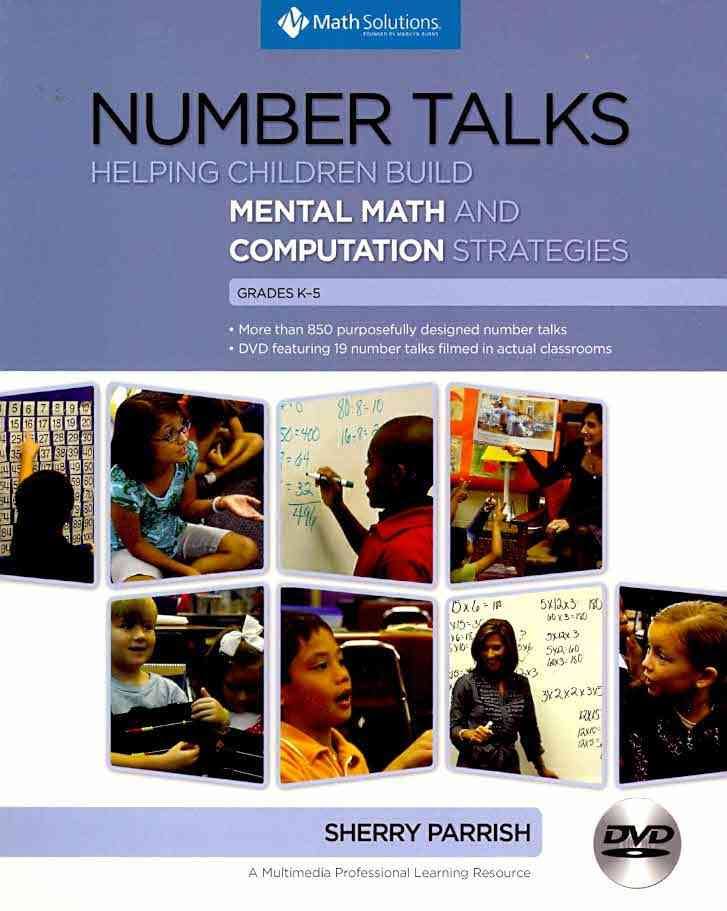 When I think back over my memories of mathematics in school one of the most prevalent was of sitting in grade six class frantically trying to complete a worksheet full of arithmetic questions while the teacher timed us to see how many we could complete in the given time. I still remember that feeling of panic as I tried my hardest to get through those questions. To say it was traumatic may be overstretching but given what we know today about maths anxiety or as Stanford University Professor Jo Boaler puts it ‘maths trauma’, I am safe in saying that it definitely helped shape my relationship with maths for years to come.

Thankfully today, that focus on rote memorisation is, or should be, a thing of the past. What many mathematics educators know about maths learning is that it can no longer be looked at as a set of rules and procedures to be memorised, but rather a system of meaningful relationships to be investigated and explored.

Luckily for me, I also had some amazing maths teachers and lecturers who both encouraged and fostered my love of the subject in later years. Sadly however, for many kids and adults, this type of rule based learning and memorisation has caused long term damage and has played a large role in creating maths anxious and disaffected maths learners (Boaler, 2015).

The good news is however, that there are ways that we as educators can help our students by building in them something called Number Sense.

Number sense is a relatively new term in maths education. It refers to the ability for students to work flexibly and conceptually with numbers. Research has shown that students who experience the greatest success in maths generally have a deeper, more intuitive understanding of numbers and how they relate to each other. They are able to view them conceptually and have developed strategies to adapt them to solve various situations. Simply put, they have good number sense.

Number sense is referred to in a range of mathematics literature. Books such as Number Sense Routines by Jessica F. Shumway and Jo Boaler’s Mathematical Mindsets talk extensively about how developing a strong ability to work flexibly with number is crucial in maintaining a deeper connection with maths concepts in later years. However, if I was to choose one book that encompasses this idea of developing strong number sense it would have to be Sherry Parrish’s Number Talks.

According to Parrish (2010), “Number talks are short ongoing daily routines that provide students with meaningful practice in mental computation”. They are designed to be introduced as both short, 5 – 15 minute warm ups at the beginning of a lesson or as stand-alone sessions that are used to extend and engage students in arithmetic strategies. Number talks are intended to encourage the development of students’ mental maths skills, an important facility for the reduction of the cognitive load when tackling heavy maths problems. During a number talk, students are encourage to justify their thinking while communicating the solutions to the problems solved mentally.

Here’s how a number talk works

In her book, Sherry also encourages the use of open arrays when communicating solutions in order to provide a visual understanding of each strategy used. There has been much literature on the importance of arrays in developing multiplicative thinking in students and they are a vital concept in learning multiplication and division. Their repeated use in a number talk helps to consolidate these important skills.

For the junior primary level, number talks can be done in the form of a dot talk. Helping students recognise quantity at an early level through subitising is a vital skill and this is encouraged through a dot talk. The basic rules are the same, but instead of presenting students with a numerical problem, a dot card is held up and students are asked ‘how many dots?’, as well as stating the different ways that they saw the collection. Again, these are all presented on the board and open for discussion and communication.

By immediately recognising a collection of numbers or subitising, students start to understand how a number is made up. This understanding of part-whole relationships helps children to separate and combine numbers and accelerates learning in addition and subtraction. An example of a dot talk is shown below. 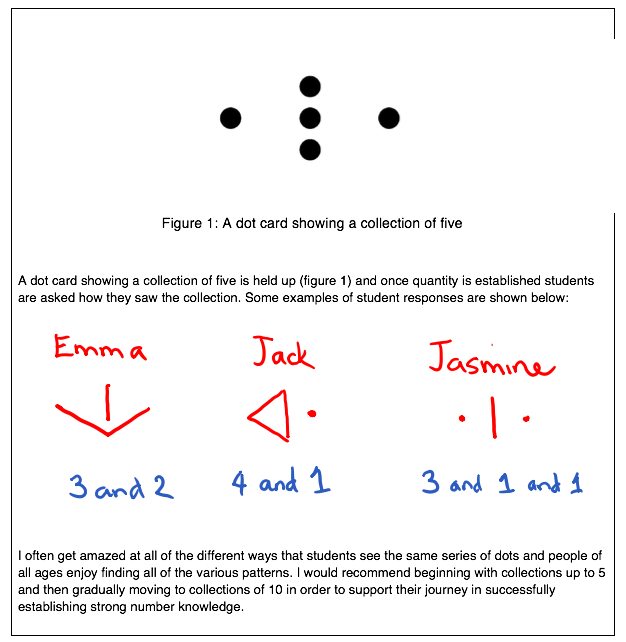 Key components of a number talk

Five key components to doing a successful number talk are discussed in the book. These are:

In short, when doing a number talk, it is important to foster a cohesive classroom community where students feel safe enough to offer responses for discussion, question themselves and investigate new strategies. Communication is key and this should be encouraged and supported. Once students have practiced a few number talks, they will soon start to discover new experiences in mathematics and so many different ways of solving the same problem. In fact, I have not done a number talk where a student did not make the comment “I never thought of doing it that way” or, “I’m going to try that next time”. Over time, you will find that with regular use, number talks will dramatically improve their ability to access the mental maths strategies necessary to become facile maths learners. They also provide teachers with a great opportunity to establish the level of numerical understanding of each student.

Number Talks: How and Why?