New data collated by Internet analyst Mary Meeker for a report on Internet trends shows the huge amount of time people over the world are spending looking at their screens. The chart breaks down screen usage per country, with the break down including computers, television sets, smart phones and tablets.

The top five countries for recorded screen usage are Indonesia, Philippines, China, Brazil and Vietnam – with the US coming in as a close sixth. With the two highest daily averages, citizens of both Indonesia and the Philippines spend over five hundred minutes per day engaged at their screens – which works out to be around 9 hours. 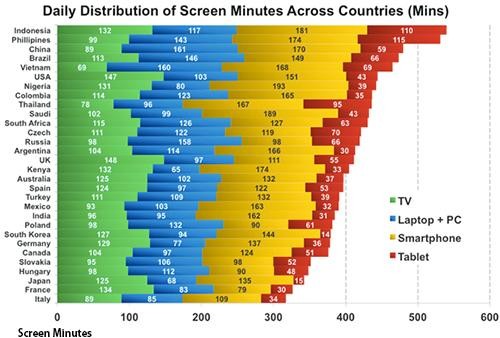