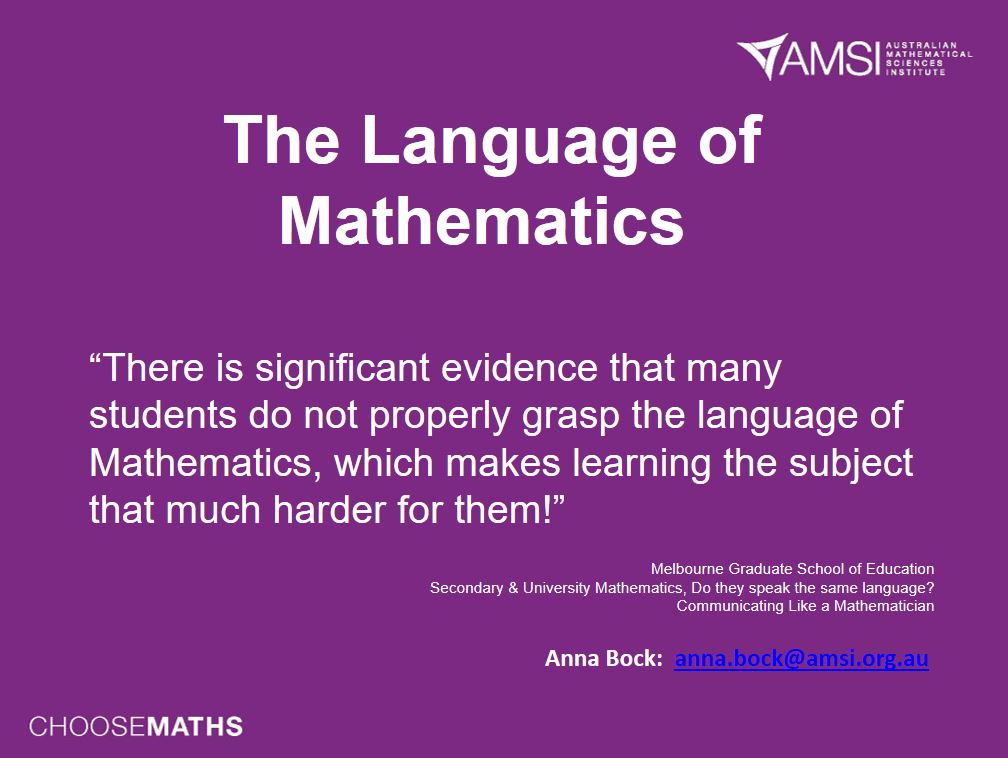 The Language of Mathematics

The following allow us to reflect on the language we use in Mathematics and how we can support students in their learning of concepts by using the correct terminology.

Recently, I was working with a school on their NAPLAN analysis. As we worked through the Item Analysis Report it became clear to the leaders of the school that some of the language and vocabulary presented in NAPLAN created confusion for many students across the school. As a result of these insights, a Professional Learning session was planned for all staff, addressing correct and consistent use of Mathematical Language, in order to ensure that students are exposed to the correct terminology.

The process used for this session began by identifying the purpose of the Professional Learning session. Firstly, every staff member was asked to record the words they currently use when teaching the four operations and lists were created from these. ‘Plus’, ‘add’ and ‘make’, were some of the words used for addition. Lists were also created for Subtraction, Multiplication and Division.

Mathematical vocabulary taken from the Australian Curriculum relating to the four operations were then added to the lists. Many of these had not been identified as part of current vocabulary being used.

Partitioning, for example, is sometimes referred to as number busting or breaking numbers. If different words are used to describe the same concept, students may experience confusion and be unable to access the Mathematics concept of partitioning as consistent language is not being used.

The word ‘sum’ is yet another example. It is often used when describing a number sentence or an equation, however this is an incorrect use of the word as it refers to the total in an addition problem. In this case, the terms ‘number sentence’ and ‘equation’ would be better options to use. Unfortunately, many commercially produced materials do refer to number sentences and equations as sums. Unfortunate but true!!!

In pairs, teachers were provided with the overview of the Australian Curriculum. The task was to highlight the Mathematical terminology which existed. This exercise allowed teachers to focus on the vocabulary which exists in the Mathematics curriculum and provided an opportunity to reflect on their current use of Mathematical language. At the completion of the task a couple of questions were posed:

Some questions to consider:

These questions allow us to reflect on the language we use in mathematics and can show how we can support students in their learning of concepts by using the correct terminology.

The Power Point included outlines the process used in one CHOOSEMATHS school but it can be adapted in address your own school  context.